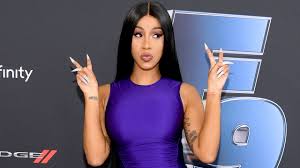 During an interview with Stationhead on Wednesday (March 18), Cardi reflected on her come-up and how she didn’t really look up to anyone when she first started in the industry. “When I came to the game and people used to be like, ‘Who do you look up to?’” she said. “I always used to say, ‘I don’t look up to nobody,’ because I didn’t really understand the game and I only feel like I got influenced by the people that was around me.”

Now that Cardi has become a superstar herself, her motivation to succeed has changed drastically.

“But now that I’m at the level that I’m at, one of my biggest influences is Rihanna and JAY-Z,” the Grammy Award-winning rapper said. “And I’m not just saying it to kiss ass or anything. I just feel like they’re so influential because Rihanna comes from a country, a Caribbean country, that my parents came from and she’s a whole billionaire.”

As for Hov, Cardi admired how the Brooklyn legend has a strategy for every one of his businesses. Hov built that mindset in his hood and the Bronx rapper can relate to that.