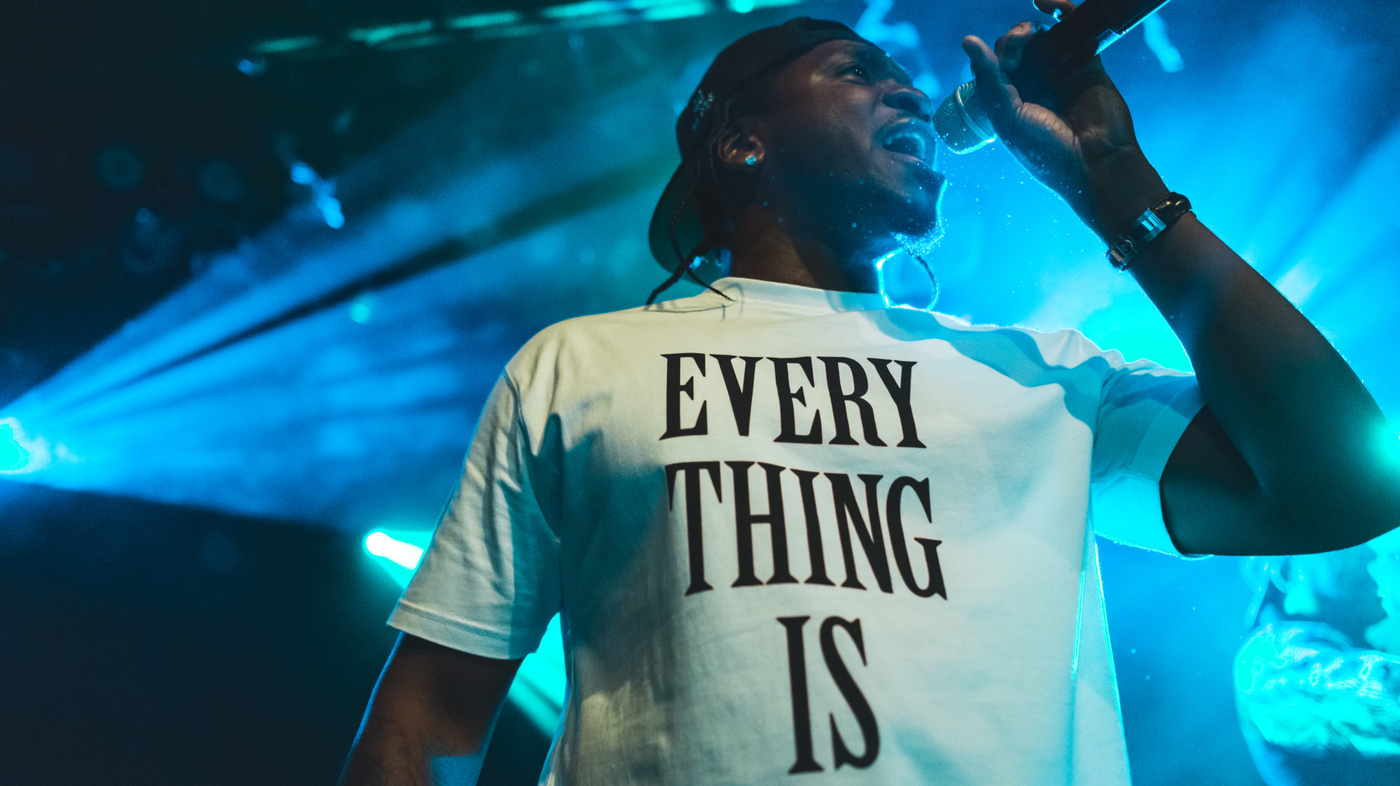 Pusha T made one hell of a statement tonight: having the best rap album with his latest project, It’s Almost Dry. His first record in almost 4 years, with half the production by Pusha T himself, the 12-track body of work is home to “Neck & Wrist” featuring Pharrell Williams and Jay Z — a record that undoubtedly broke the internet upon release. There’s something about the synergy between Pusha and Pharrell that’s unmatched, and adding a Jay Z verse was the icing on the cake.

A true legend in the rap game, the Bronx, New York native has been dominating the hip-hop realm for decades, and it seems he hasn’t let the foot off the gas pedal one bit. Currently, he’s on his It’s Almost Dry Tour, phase 1. Which means Tuesday evening (May 31st) meant his FIRST Los Angeles show at The Novo in downtown Los Angeles. Apparently, they even added a second show later that weekend because tickets sold out so quickly.

With the venue jampacked with hip-hop heads left and right, fans were ready to turn up and have a good evening. But this wasn’t just a regular concert, Pusha T is about to put you on game. His bars and punchlines might be some of the best in the game, and sometimes you need the energy of the crowd for reassurance.

Immediately on stage, you’re welcomed with LED screens, as the bright visuals and lights reminded you this man is a superstar. The show kicked off with “Let The Smokers Shine The Coupes” from the new project, which lead to the intro track “Brambleton.” There, Pusha raps “It was sad watching dude in Vlad interviews” — addressing the interview with Pusha’s old manager Anthony “Geezy” Gonzalez.

Soon, we picked up that he was running through his new music first. “Just So You Remember,” “Call My Bluff,” “Dreamin of The Past” featuring Kanye West, and Hear Me Clearly” featuring Nigo, and of course “Neck & Wrist: featuring Pharrell and Jay Z.

But the best moment of the show had to be when Pusha was rapping acapella, when all of a sudden the beat in “If You Know You Know” drops. Instant madness and instant love ensues from the crowd, as Pusha T enters into his “hit records” part of the phase. “The Games We Play” followed suit, before “Nostelgia” featuring Kendrick Lamar. And if you’re a new fan, this might be one of Pusha’s most-slept on videos.

Next was paying a visit to his 2018 Daytona album, playing “Come Back Baby,” “Santeria,” and “What Would Meek Do?” featuring Kanye West. Once the intro of “New God Flow” began, fans couldn’t help but scream. At this point, you were reminded exactly how many songs Pusha and Kanye have together.

Pusha played his previous hit records, “Numbers on the Board” and “Diet Coke,” before doing “Call My Bluff.” Then, the real hits came. “Mercy” with Kanye West was a moment of time, as was Future’s “Move That Dope” (which definitely was played in every club at one point).

Afterwards, he called out the real day one fans before going into “Grindin” by The Clipse. While that song played an instrumental role in kickstarting Pusha’s name and legacy, it was his closing song “Scrape It Off” featuring Don Toliver and Lil Uzi Vert that reminded us Push can hang with the young, new cats on the scene.

It’s always hard to determine an artists’ success. But if you’re selling out shows, you’re definitely on the right path.